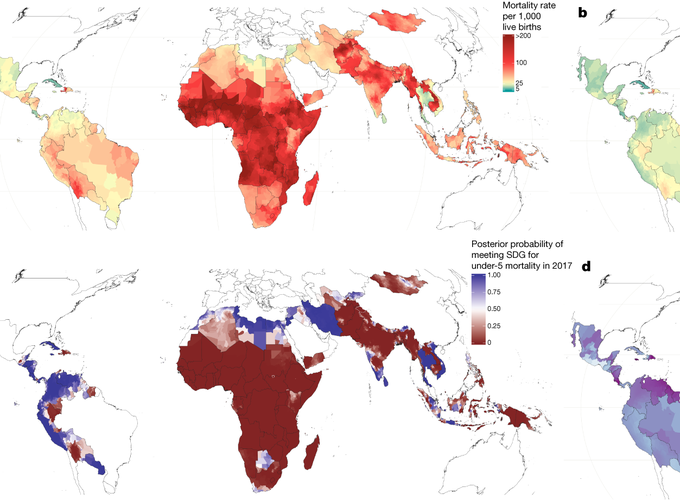 Since 2000, many countries have achieved considerable success in improving child survival, but localized progress remains unclear. To inform efforts towards United Nations Sustainable Development Goal 3.2—to end preventable child deaths by 2030—we need consistently estimated data at the subnational level regarding child mortality rates and trends. Here we quantified, for the period 2000–2017, the subnational variation in mortality rates and number of deaths of neonates, infants and children under 5 years of age within 99 low- and middle-income countries using a geostatistical survival model. We estimated that 32% of children under 5 in these countries lived in districts that had attained rates of 25 or fewer child deaths per 1,000 live births by 2017, and that 58% of child deaths between 2000 and 2017 in these countries could have been averted in the absence of geographical inequality. This study enables the identification of high-mortality clusters, patterns of progress and geographical inequalities to inform appropriate investments and implementations that will help to improve the health of all populations.

You can read the full article here.